FOR COOKS WHO READ 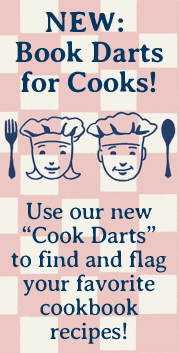 Klindt's Bookstore of The Dalles, Oregon Background: Klindt's was opened in 1870 by the Nickelsen family, the state's second book store after J.K.Gill's of Portland, and is now the oldest continuous one in Oregon. In 1927, the Weigelt brothers bought the store.

Phillip Klindt and his wife, Linda, bought the store from the Weigelts in 1981 and have only added to its charm, services and variety. For example, their large rental collection of foreign and US art films gives The Dalles more of the resources and feeling of a college town.

Since 1929 until she recently had a stroke, Edna Weigelt has worked in the store, first for her brothers and then for the Klindts. Mrs. Klindt, Phillip's mother, moved to The Dalles in 1929 as well, to work as a teacher. Edna and Mrs. Klindt became fast friends and worked together in the store after it became Klindt's in 1981. Mrs. Klindt is still serving her many personal customers and must be one of the oldest booksellers anywhere.

In early 2001, Linda Klindt, a used book maven, former Russian language professor and world travel guide, died and, though fairly young, reminded all of us who knew her, of the truth of the African proverb, "When an old person dies, a library burns down."

Many customers comment on the old original and squeaky wooden floors which make us all aware of the historical nature of this enterprise. I believe that the atmosphere of the building, the presence of Edna and Mrs. Klindt, and the younger Klindts' ardor to preserve a part of America fast becoming very rare all serve to assure customers that their needs are most important, no matter how small or low-profit they are. Even use here of the word "profit" seems wrong and not even second on the Klindt list of priorities.

Just a note of interest, perhaps: On one of my many visits I noticed that Klindt's offers at least 3 editions of Jonathan Slocum's sailing adventure. At that time, I watched a customer trade her recently bought copy of R.L. Stevenson's Child's Garden of Verses for a more expensive edition; so they carry at least 2 of those.

Philip Klindt says that they are strong in Northwest history, outdoor activities, identification guides, Columbia Gorge and eastern Oregon, mysteries, cook books, fiction ("contemporary and the classics"), and points out that they have a children's book room. They make special orders twice a week and can get some things overnight if the order is in by 10:00 a.m. Philip says, "We can tell customers we know of books we know they'll be interested in examining."

"We try to be a place where you can be comfortable for a half hour or several hours. I've offered customers the key to the place so they can lock up when they're done." "It's almost like inviting someone into your home, and they'll feel like coming back and visiting if you treat them well and enjoy them.

"There is no substitute for enjoying the people you're dealing with. People know immediately if you're phony in how you greet them and talk to them and question them. We can all tell when people are genuinely interested in us and curious about us."

Speaking of their travel book section and his and Linda's work as travel guides for their local friends, he says, "We like to show them things we like."

He also points out that The Dalles is the main town for a radius of 60 miles. "You don't want to forget about them."

About their film rental library he says, "Many people know through the internet and such what is going on in film, but you can't always find those movies. We don't have movies that rent fast and often, but do have a good collection, about 1900 videos." This collection is growing through he acquisition of art and foreign films before they go out of print. One third of the collection is now out of print.

Philip says, "The Dalles never lost its downtown. We've kept our core." He mentioned gourmet restaurants and inexpensive cafes a short distance from the store and pointed out some of the old buildings that house unique stores that you will not find at the malls, stores that specialize in baby clothes, vacuum cleaner sales and repair, antiques, and draperies. There are 3 pet stores and 2 locally owned jewelry stores within a few blocks.

A beautifully and newly remodeled old theater, The Granada, is a half block from this wonderful old book store with its wooden floors that remind you of its long history with every creaking step.